Ditching coal in steelmaking could save over 9,000 lives, new study shows

Steel decarbonization can have massive climate and public health benefits.

November 28, 2022 – Transitioning away from coal-based steelmaking in South Korea - the world’s sixth largest steel-producing country - could save over 9,000 lives across East Asia between 2022 and 2050, according to a new study by Solutions for Our Climate (SFOC) and the Centre for Research on Energy and Clean Air (CREA) published today.

The study shows that air pollution from South Korea’s three coal-fired steel plants, two of which are operated by POSCO and one by Hyundai, could cause an estimated 19,400 premature deaths by 2050 under a current policy scenario. The economic burden of air pollution could amount to KRW 127 trillion (USD 111 billion) due to higher healthcare costs and reduced productivity.

The number of fatalities almost halves under the study’s 2050 carbon neutrality roadmap for steel in South Korea, which envisages the phase-out of traditional blast furnace technology and the adoption of renewable and green hydrogen-based steelmaking technology. Cleaning up the steel sector could also lead to savings of approximately KRW 61 trillion (USD 53 million) over the same period.

“Coal-based steelmaking emits greenhouse gases and other air pollutants deadly to both the climate and human health. Hence, the Korean steel industry must set concrete decarbonization plans to not only meet our 1.5C target but also to save lives,” said Geunha Kim, researcher at SFOC and the author of the study. Coal is the world’s largest contributor to carbon pollution. 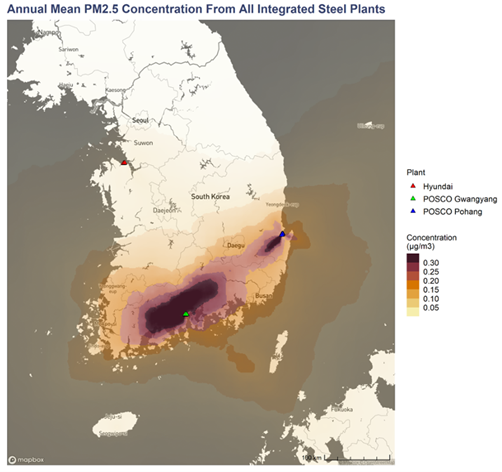 “POSCO-operated Pohang plant is the oldest steel facility in Korea, which has exposed communities to environmental harms and toxic air pollutants for over 50 years,” said Chimgwi Jeong, the head of Pohang Korean Federation for Environmental Movements. “Hydrogen-based steelmaking is without a doubt critical to achieving carbon neutrality, and in doing so, there must be a roadmap for emissions reduction and safety.”

Blast furnace-basic oxygen furnaces (BF-BOFs), a coal-based steel production, account for approximately 70 percent of global steel production. However, with increasing scrutiny of the steel sector, global steelmakers are beginning to make a flurry of announcements on developing cleaner production methods.

“Global steel is already moving towards decarbonization, with increasing efforts to boost the amount of recycled steel, as well as retrofit and transition coal-based blast furnaces, increasing the use of renewables for power, and incorporating hydrogen or carbon-capture,” said Isabella Suarez, Southeast Asia analyst at CREA.

“This report shows that by pursuing an ambitious Net Zero by 2050 roadmap, South Korea can not only lead these efforts in Asia but also yield massive gains in air quality and health for its citizens.”

Solutions for Our Climate (SFOC) is a South Korea-based group that advocates for stronger climate policies and reforms in power regulations. SFOC is led by legal, economic, financial, and environmental experts with experience in energy and climate policy and works closely with policymakers.

The Centre for Research on Energy and Clean Air (CREA) is an independent research organisation focused on revealing the trends, causes, and health impacts, as well as the solutions, to air pollution. CREA uses scientific data, research and evidence to support the efforts of governments, companies and campaigning organisations worldwide in their efforts to move towards clean energy and clean air.

For media inquiries, please reach out to: